Located in Eastern Algeria’s commercial capital, often also described as the cradle of Algerian independence, Ferhat Abbas Sétif University 1 was founded in 1978 as the Sétif University Centre. It takes its name from a political leader in the civil war which led to separation from France in 1962.

Starting with 242 students in schools of economics, exact science and technology and foreign languages, it grew to attain full university status in 1989. The university was divided into two institutions in 2011, with Ferhat Abbas Sétif University 2 dedicated to law and political science, humanities, literature and languages.

The main campus including the faculties of medicine, science, natural and life sciences, economics, commerce and management and architecture and Earth sciences, remains at El-Bez, its connection to the rest of the city enhanced since March 2018 by the opening of the Sétif tramway system. The Faculty of Technology is based at El Maabouda and the Institute of Optics and Precision Mechanics at Said Boukhrissa.

In an institution aspiring to be a “development driver” for the region, research projects include intensive study by the Laboratory of the Urban Project, City and Territory of the threats to local ecological balance and the digital scanning of Sétif’s numerous historical monuments. Further afield, the university ranked second among Algerian universities in the 2018 Nature Index. 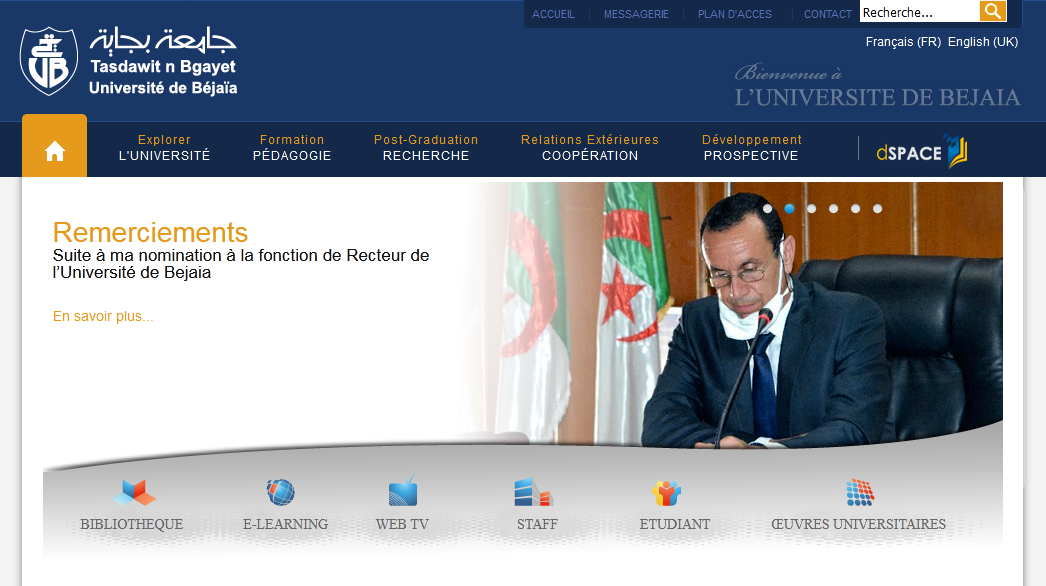 Founded in 1983 with 205 students, the Universite Abderrahmane Mira or University of Béjaïa, claims to be among the fastest-growing universities in the world. While it took this Algerian institution until 1992 to attain the status of a university centre, and 1998 before becoming a university, within less than 30 years it has more than 40,000 students.

Named after a native of the Béjaïa province who died in 1959 as one of the heroes of Algeria’s war of independence.

The university teaches in French, Arabic and Tamazaght (also sometimes called Berber) reflecting Algeria’s wider language mix. It has offered Tamazaght courses since 1991 and its students have been among the most committed campaigners for language rights.

Based in the Mediterranean seaport city whose wax industry and Francophone nickname – bougie – gave rise to the French word for candle, the university is based on two campuses, which between them have more than 30 research laboratories.
The Targa Ouzemmour campus hosts technology, exact sciences, natural and life sciences while the Abouau campus opened in 2003 on the road between Béjaïa and Tichy is occupied by the medical school along with the faculties of law, economics, management and commerce and arts and languages. A third campus is under development at Berchiche.

It aims to combine “sustainable development…in harmony with the challenges of globalisation”, and hosts research centres for Innovation and Technology Transfer and Food Technology. As the leading Algerian university in the 2018 Nature Index, it has been one of four Algerian participants, of which two are universities, in the Erasmus SATELIT project, aimed at developing the innovation ecosystems of higher education institutions in the Maghreb region.

Established in 1984, the University of Biskra is a public university located in the city of Biskra, northern Algeria.

Biskra is the regional capital of the Biskra Province, located at the beginning of the Sahara Desert.

With a history stretching back to the Roman era, Biskra has a great deal to offer students, with a vibrant community and a wide range of cultural and historical landmarks.

One of the warmest cities in the world, Biskra has been known as “The Nice of the Sahara” for its location on the border to the desert, and the region is home to the Sidi Okba, one of the holiest sites in Islam.

The university maintains a wide range of faculties providing a large number of subjects at both the undergraduate and postgraduate level.

These faculties include law, political science, science and technology, economics and management and languages. To support these faculties, the university maintains modern academic facilities including a library, numerous science labs and dedicated study areas. The university also offers a variety of online courses for distance learners.

The campus plays host to a number of academic facilities including a dedicated research centre, a large university restaurant, and a student health centre. All of these were completed in 2011 and complement a number of older facilities including a renewable energy lab, numerous amphitheatres, and labs dedicated to industrial chemistry, mechanics, civil engineering and architectural workshops.

The University of Constantine 1, formerly known as the University of Mentouri, was set up in 1969. Its full French name is now Université Frères Mentouri de Constantine 1. It has been officially recognised by the Ministère de l’Enseignement Supérieur et de la Recherche Scientifique, Algérie (Ministry of Higher Education and Scientific Research, Algeria).

It is a very large university, with over 62,864 students and 2,247 administrative and teaching staff.

An inland city, Constantine is around 80km from the Mediterranean coast, on the banks of the Rhumel River, which is more of a brook, despite its name.

Constantine was named the Arab Capital of Culture in 2015.

Constantine is often referred to as the “City of Bridges” due to the numerous picturesque bridges connecting the various hills, valleys, and ravines that the city is built on and around. It has a population of about 448,000. 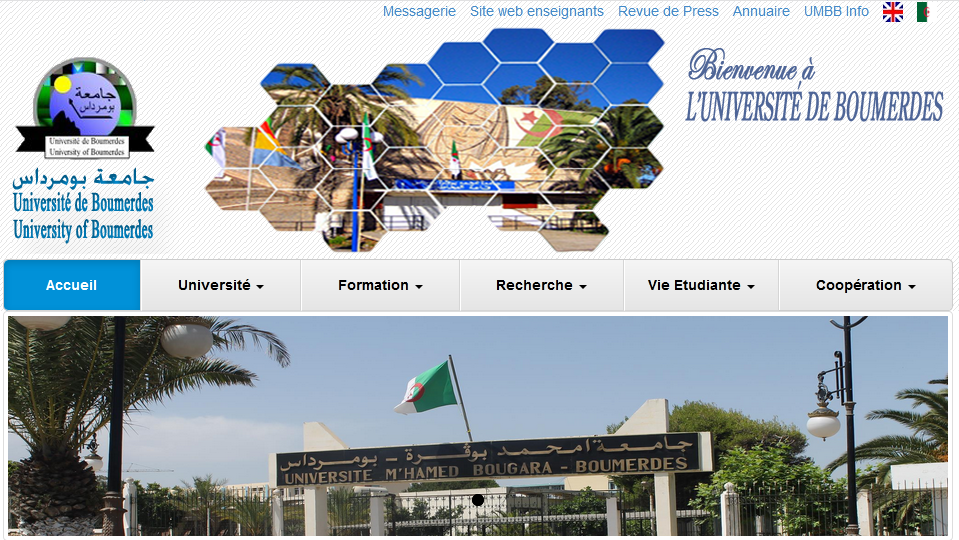 Established on the site of a number of older institutions of higher learning, M’Hamed Bougara University of Boumerdes first opened its doors in its current guise in 1998. The university is named for Colonel Si M’hamed Bougara, a soldier who fought for Algerian independence.

The university provides courses at both undergraduate and postgraduate level within five faculties and one institute, primarily within the field of STEM subjects. These include faculties in the sciences, engineering, law, economics, chemistry and electrical engineering.

In order to support these subjects, the university maintains a range of high-quality academic facilities. These include an intensive language centre, library, audio-visual centre, and a dedicated facility for distance learning and off-site study.

As well as this the university also works to provide a series of recreational facilities in order to foster a strong student culture and identity. A range of cultural, sporting and scientific activities are held throughout the year, celebrating both domestic and international events.

The university was built on an area of 105 acres by the famous Brazilian architect Oscar Niemeyer, who is regarded as one of the greatest architects of the 20th century. Although attention is mostly on his projects in Brazil and Europe, he designed 12 buildings for Algeria, most of them during the period of his exile after the military takeover in Brazil in 1964. Construction began on the facility in 1968 and was completed in 1974. For Houari Boumediene, who was Algeria’s president at the time, Niemeyer’s buildings were a sign of Algeria’s modernity and commitment to leave behind the past.

USTHB is organised into eight faculties (mathematics; physics; chemistry; biological sciences; earth sciences and geography; electronics and computer science; mechanical and chemical engineering; civil engineering) and 53 research laboratories. Until 2013, it was the largest university in Algeria, with around 20,000 students.

It has developed strong networks and undertaken many research collaborations with western universities, especially in France. It has a football team and a basketball team which participated in the National Collegiate Athletic competition, and an agreement with the Algerian Olympic complex in order for students to use the pool.

Courses are taught in French, except for the geography curriculum, which is taught in Arabic.

University of Science and Technology of Oran Mohamed-Boudiaf 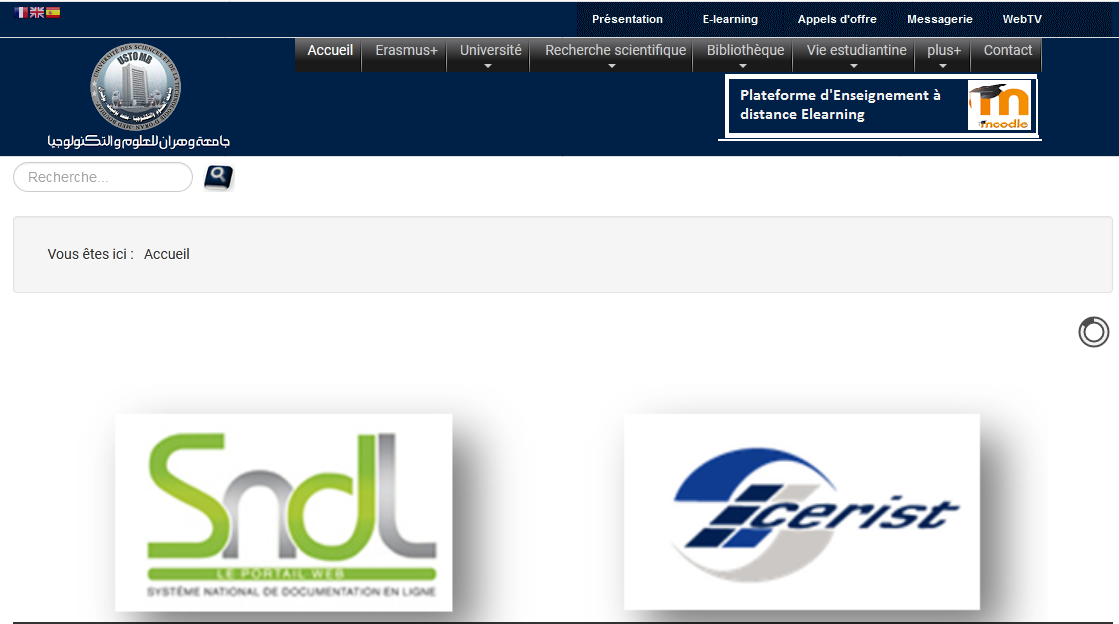 Université des Sciences et de la technologie d’Oran Mohamed-Boudiaf (or The University of Science and Technology of Oran-Mohamed-Boudiaf) is located in the commune of Bir El Djir in the east of Oran, in Algeria.

In front of the university, there is the large, modern Oran University Hospital (EHU Oran) which is used extensively by the Faculty of Medicine Moulay-Driss-Mansouri (or the USTO Faculty of Medicine) to train student doctors and nurses.

Oran is regarded as Algeria’s second city after Algiers and boasts French colonial-era architecture and bustling streets. This lively port city has approximately 760,000 inhabitants. Oran’s old quarter has a casbah and an 18th-century mosque, while the modern section referred to as La Ville Nouvelle, has plenty of high-rises and hotels. 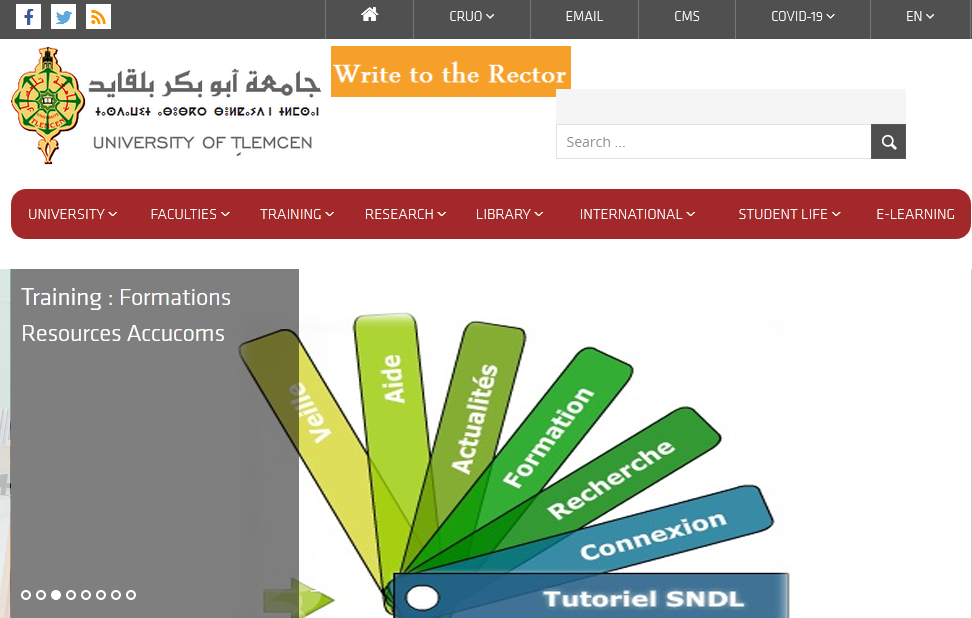 Located in the most north-westerly region of Algeria, the Abou Bakr Belkaïd University of Tlemcen is a coeducational public university that received university status in 1989. It had been founded as the Centre Universitaire de Tlemcen in 1974.

Most of the university’s campuses are based in the vibrant city of Tlemcen, the capital of the province of the same name, 50km from the Mediterranean sea, which is renowned for its Moorish architecture. A historic trade city built on the site of the old roman town of Pomaria, Tlemcen is vibrant, welcoming, home to good food, noteworthy caves, temples and mosques, and blessed with spectacular views of the Tlemcen Mountains. The university also has a campus in the smaller town of Maghnia, 30km to the west.

A modern university with up-to-date facilities, a sizeable library and several quality labs and computer centres, the University of Tlemcen has featured among the top 75 universities in the Arab world.

Tlemcen has its own international airport but is also easily accessible from Algiers, which has a wider range of transport links, including ferries. It is 65km from Morocco, but the Algerian-Moroccan border has remained closed since 1994.

It has generally had a large student body. The vast majority of its international students tend to be undergraduates.

Although Algeria’s official language has been Arabic since it gained independence in 1962, the institution’s language of teaching is French.

In line with other Algerian institutions, the university is open from Sunday to Thursday. Weekends in the country are from Friday to Saturday.