JEE Main 2020: After being postponed twice, the Ministry of Human Resource Development (HRD) had decided to hold the JEE Main April 2020 exams from September 1 to 6. Now, there might be a slight change in the schedule as the JEE Main exam dates are clashing with that of UPSC NDA exams.

In a recent tweet, HRD Minister Ramesh Pokhriyal Nishank writes, “I have received representations from many students regarding the clash of dates of #JEEMain with #NDA. The matter has been examined. Students appearing in JEE (Main), who could not update that they are also appearing in the NDA exam scheduled on 6th Sept, should not worry.” He added, “NTA will ensure that the two exams don’t clash for candidates appearing in both the exams.” 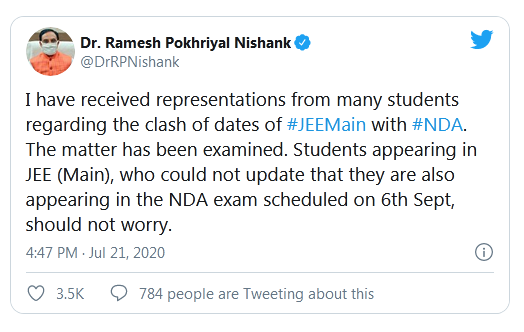 Would this mean a slight shift in the dates allotted for the JEE Main exams?

More than 9 lakh students have registered to apply for JEE Main – which is the entrance exam for admission to engineering colleges across India and the first step to apply for IITs as only students who have cleared JEE Main can appear for JEE Advanced.

This year, students have got more time to prepare for JEE Main and NEET. Experts believe that since the time is available to all students, there are chances that top-ranking students would make the most of it and the cut-off would go higher this year. Since there is relative marking or percentile scoring, students can expect a tougher competition. Students belonging to rural areas or places with connectivity issues might bear the brunt.

Earlier, HRD Ministry had asked the National Testing Agency (NTA) to double the number of exam centres, increase the distance between the students during the exams, allow fewer students in the exam hall and make the wearing of masks mandatory, a thermal check-up at entry points among other safety measures.

To ensure the academic schedule is disrupted the least, NTA had decided to announce JEE Main results in five days. In case of a bigger shift in dates, the result declaration schedule might also suffer. However, it seems likely that alternative arrangements will be made for UPSC NDA applications only.

To ensure the least commute for candidates, the NTA also allowed several windows for students to change their exam centre and shift it to closer to their latest residing area.