Prime Minister Narendra Modi will address the grand finale of Smart India Hackathon on Saturday via video conferencing and also interact with students on the occasion, according to an official statement.

“Young India is filled with talent! The grand finale of the Smart India Hackathon 2020 showcases this very spirit of innovation and excellence,” PM Modi tweeted. The interaction with the finalists of the Hackathon will take place at 4.30 p.m. on Saturday.

The hackathon is a nationwide initiative to provide students with a platform to solve some of the pressing problems people face in daily lives, and thus inculcate a culture of product innovation and a mindset of problem-solving, it said.

“It has proved to be extremely successful in promoting out-of-the-box thinking in young minds,” the statement said. 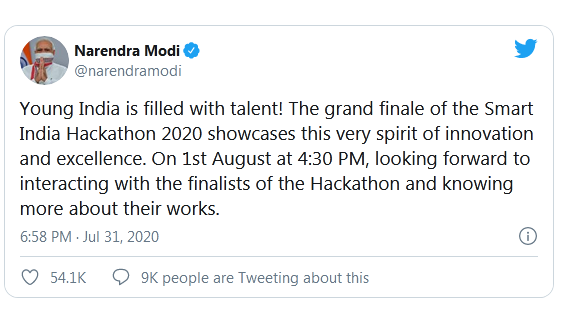 “The Smart India Hackathon has emerged as a vibrant forum to ideate and innovate. Naturally, this time our youth would be focussing on the post-Covid world in their innovations, along with ways to create an Aatmanirbhar Bharat,” the prime minister wrote on Twitter

The first round of Smart India Hackathon 2020 saw the participation of more than 4.5 lakh students.

More than 10,000 students will be competing to solve 243 problem statements from 37 central government departments, 17 state governments and 20 industries.

“The grand finale of the software edition this year is being organised online by connecting all the participants throughout the nation over a especially-built advanced platform. More than 10,000 students will be competing to solve 243 problem statements from 37 central government departments, 17 state governments and 20 industries,” the statement said.

“The Prime Minister, Shri Narendra Modi will address the grand finale of the largest ever online hackathon in the world, from 7 pm onwards on August 1, 2020, through video-conference,” the Education ministry said in a statement on July 31.

Announcing this, Union Education Minister Ramesh Pokhriyal ‘Nishank’ said that the grand finale of the Smart India Hackathon 2020 (Software) will be held from 1 to 3 August.

The Union Minister said that the hackathon is a “unique initiative to identify new and disruptive digital technology innovations for solving challenges faced by our country.” “Students would have the opportunity to work on challenges faced by government departments and private sector organisations for which they can offer out-of-the-box and world-class solutions,” the ministry said in the statement.

The ministry said that owing to the Covid pandemic, the finale of the hackathon would be conducted online.

Pokhriyal said that considering the Covid-19 pandemic, the grand finale for SIH 2020 shall be organised online by connecting all the participants throughout the nation together over a specially-built advanced platform, according to the ministry.

“This year, we will have more than 10,000 students competing to solve 243 problem statements from 37 central government departments, 17 state governments, and 20 industries. Each problem statement carries prize money of Rs 1,00, 000 except the student innovation theme which will have three winners, 1st, 2nd, and 3rd with prize money of Rs 1,00,000, Rs 75,000 and 50,000 respectively,” the ministry said.

This hackathon is being organised jointly by the Ministry of Human Resources Development, All India Council for Technical Education (AICTE), Persistent Systems and i4c.

Earlier in the day, the minister chaired a high-level meeting and discussed the achievements of the already conducted hackathons.

“Smart India Hackathon is a unique initiative to identify new and disruptive digital technology innovations for solving the challenges faced by our country. It is a non-stop digital product development competition, where problems are posed to technology students to suggest an innovative solution,” He said while chairing the meeting.

Pointing out that the Smart India Hackathon has grown in the past few years, the minister said, “The first edition of SIH-2017 saw the participation of 42 thousand students, which substantially increased to 1 lakh in SIH 2018 and later to 2.0 lakh in SIH-2019. SIH 2020 is even more massive as compared to SIH 2019 and the first round saw the participation of more than 4.5 lakh students.”

“In order to develop an Atma Nirbhar Bharat, we need to ensure that the teams are carefully mentored from the ideation stage to the prototype stage. Once the idea has come from the student, it should be the responsibility of the mentor to ensure that the idea gets implemented either through the start-up or the department,” he said.