The Joint Admissions Board (JAB) will “surely” discuss increasing the number of attempts allowed for the Joint Entrance Exam (JEE) Advanced, however, it will be discussed for 2021 attempt, informed the IIT-Delhi director V Ramgoap Rao. In a tweet, the director wrote, “One needs to understand the decision-making process in a government system. For increasing the number of attempts as a special case for JEE 2021, no one will decide it right now. This matter will be taken up at an appropriate time after JEE Advanced 2020 is conducted.”

Whether or not the relaxation is allowed would be considered after the meeting. Rao said that the decisions in a government set-up are not made based on the number of tweets in the favour of a topic. He asked students to “please trust the process and the people involved. Please focus on your studies and your preparations for the 2020 exams.”

“Everyone in the Ministry is concerned about the situation and everyone wants to help the students in the best possible way. But decisions cannot be taken based on the number of tweets supporting a cause or the trolls on Twitter. In committees, a lot of facts and figures are considered and considerable discussions take place before arriving at a decision. All decisions will be in the best interest of the country,” he wrote in his social media platform. 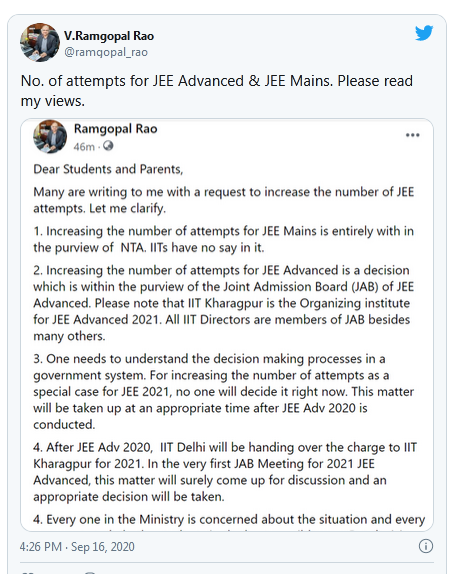 The demand for having more attempts in JEE Advanced caught fire when a Supreme Court lawyer penned a letter to Education Minister Ramesh Pokhriyal asking for the same. “Candidates get 6 attempts – two attempts, January and April, each year for three consecutive years for JEE Main while for JEE Advanced only two attempts are allowed as per rules. Even after qualifying JEE Main with top ranks in their third attempt, students are not permitted to appear in JEE Advanced. This is unjust, particularly to underprivileged and rural students,” the letter read.

Watch also: How the Pandemic Could Transform Higher Ed

The demand is being raised this year because many students claim that they were not able to prepare because the classes were shut. Further many did not have constant access to the internet for online classes.