The NIRF India Ranking parameters and the weighted averages adopted to derive the rankings differ for all the categories. The broad categories adopted to rank the colleges, universities and institutes include Teaching, Learning and Resources; Research and Professional Practice; Graduation Outcomes; Outreach and Inclusivity and Peer Perception. 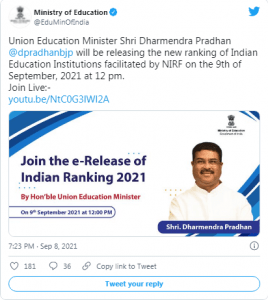 Last year in NIRF Rankings 2020, IIT Madras was placed as the best institute in the Overall and Engineering category. In the Universities category, IISc Bangalore was ranked one followed by Jawaharlal Nehru University at second place, while Maulana Azad Institute Of Dental Sciences was the best Dental college, AIIMS Delhi, the best medical college, NLSIU Bengaluru was placed as the best law institute. IIM Ahmedabad topped in the management category and IIT Kharagpur was the best in the Architecture category.