Founded in 1815, Vienna University of Technology (TU Wien) was known original as the k. k. Polytechnic Institute with a focus on scientific research and teaching. Five faculties were created in 1865 before it was renamed the Technical University in 1872. Over a hundred years later, in 1975, it adopted the name Technical University, which it goes by today. Under the 2002 University Act, TU Wien gained full legal capacity.

At TU Wien, students are encouraged to engage with the university’s research projects, many of which are incorporated into its teaching.

With close to 5,000 staff across the entire university, ranging from professors and lecturers to scientific and non-scientific staff, TU Wien caters for around 30,000 undergraduate and postgraduate students. The first doctorates at the university were awarded in 1902.

The university library, established the same year as the university, was completed in 1987. Organised across six floors it includes open access areas, reading rooms and 700 individual study desks. The building is decorated with numerous owl sculptures, designed by the Swiss artist and architect Bruno Weber, and a lion fountain on the ground floor created by the sculptor Gero Schwanberg

The Johannes Kepler University of Linz (JKU) boasts future-oriented academic degree programmes, excellence in teaching and research, numerous partnerships in Austria and abroad, and a unique campus with park-like grounds. JKU has more than 60 modern, hands-on academic degree programmes. Research conducted at all three faculties – Social Sciences, Economics and Business; Law; and Engineering and Natural Sciences – is recognised worldwide. The Faculty of Social Sciences, Economics and Business (SOWI) has created its degree programmes to address and solve complex social and business issues. JKU offers a complete spectrum of degree programmes in social, economics and business studies. The Faculty of Law (RE) focuses on public, private and international business law. Transnational cooperation efforts deal with legal issues at an international level. JKU is the only university in Austria that offers a multimedia diploma degree programme in law. The Faculty of Engineering and Natural Sciences (TN) works closely with both local and international businesses and industry. The TN Faculty offers a broad, interdisciplinary range of degree programmes and the JKU Science Park provides high-tech classrooms and modern facilities in support of teaching and research. The Faculty of Medicine (MED) is the most recent addition to JKU. Opened in 2014, the faculty offers an academic degree in human medicine. JKU is the first Austrian university to offer studies in human medicine in accordance with the new bachelor-master’s degree system. The bachelor’s degree programme will be conducted in cooperation with the Medical University of Graz. In its final phase, JKU will accept 300 students per year to the medical degree programme. 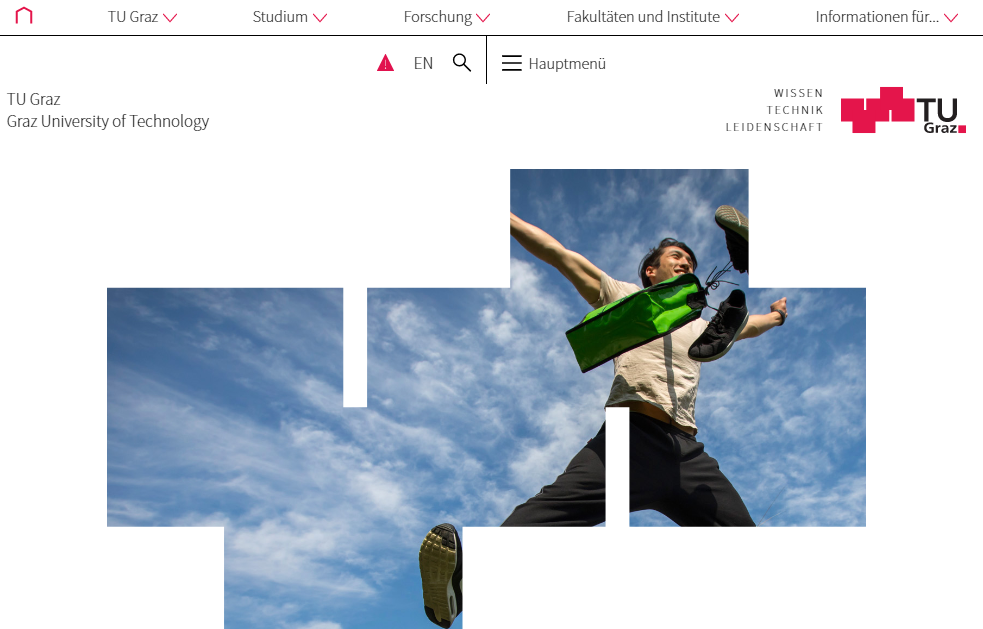 Dating back to 1811, Graz University of Technology (TU Graz) is a respected institution specialising in technical and scientific subjects.

The university was founded by Archduke Johann, who donated his extensive scientific collection to found an institution in Graz. Over 200 years the university has developed extensively, from opening its doors to women in 1919 to launching cooperative programmes with China in 2016.

When it opened in 1811, the university was based out of the stunning 16th century Lesliehof building. However, the university soon outgrew these premises. It has since expanded to three campuses in and around Graz: Alte Technik, Neue Technik and Inffeldgasse.

TU Graz has produced several notable scientists, including the Nobel Prize winning chemist Richard Zsigmondy, the inventor Hans List and battery scientist Karl Kordesch. The world famous scientist Nikola Tesla was a star pupil of the university during his first year, but subsequently dropped out after developing a gambling addiction.

Graz is the capital of the Austrian state of Styria and the second-largest city in Austria. Despite its size the city has a laid-back feel, full of parkland and coffee shops. As well as TU Graz, there are three other universities around the city, and the thousands of students contribute to a lively cultural scene and nightlife.

Considered to be the third oldest university in Austria, the University of Innsbruck was founded in 1669, with roots dating back even earlier, to 1562 when a Jesuit college was established.

The university had a tumultuous beginning and, over the years, was subject to a dissolution on two separate occasions.

Today, the university comprises 16 faculties (its most recent, the School of Education, opened in 2012), four interdisciplinary research platforms, and 33 research centres to facilitate networking and collaboration between different disciplines.

Physics, ‘Man and the Environment’, Cultural Conflicts, Scientific Computing and Molecular Biosciences are cited as being among its research priorities.

The university is located close to the Alps, bridging German and Romance speaking regions, where study programmes have developed to address the social, ecological and economic issues of the alpine region more widely.

Approximately 28,000 students are enrolled at the university, which boasts partnerships with 10 universities and co-operation agreements in place with another 400 worldwide.

Courses are taught primarily in German, with a limited number of courses in English available within the business school at master’s level and in the Political Science Department at undergraduate level.

It also has a number of accessibility programmes in place to ensure students from disadvantaged backgrounds are given the opportunity to access higher education. This includes the university’s partnerships with networks ASEA-UNINET and Eurasia-Pacific-Uninet, which works to integrate students from developing countries into European university setting.

Innsbruck is positioned between Munich in Germany and Verona in Italy, making it the Alpine region’s state capital. Renowned for its winter sports, and having hosted the Winter Olympics on several occasions, sport enthusiasts are often drawn to the university.

The city is also a popular tourist destination on account of its cultural offering and beautiful Gothic architecture.

In the central Austrian mountain city of Leoben, the country’s mining, metallurgy and materials university has been operating since the mid 19th century. Over that time, the public university, for which the German name is Montanuniversität Leoben, has evolved to include courses on the latest mining technologies and subjects, including recycling and industrial environmental protection.

The first year of a bachelor’s degree at the University of Leoben is similar for all subjects, covering mathematics, programming, chemistry and mechanics. This means that at the end of the first year, it is relatively easy for students to switch their programme. The university offers 11 bachelor of science programmes and 14 master’s degrees. The majority of courses are in German, but one petroleum engineering masters course is offered in English.

There are 3,000 students in Leoben, which has a population of just 25,000. It is the cheapest university city to rent accommodation in, according to research in 2015 by the Austrian government. Leoben city council gives each new student resident a €250 voucher and another one for €100 for every additional year they stay there to study.

In early October, the city hosts one of the largest street fairs in Austria, the Gösser Kirtag. The university’s ceremonies are closely linked to Leoben’s mining traditions. These include the “Ledersprung” or leather jump, during which first year students have to introduce themselves, quickly drink a glass of beer and then jump over some leather mining clothes.

uLektz Wall of Fame An initiative to identify, recognise & award the contributors to higher education When it comes to femininity, in the past decade…

uLektz Wall of Fame An initiative to identify, recognise & award the contributors to higher education The library is the place where students and faculties…

uLektz Wall of Fame An initiative to identify, recognise & award the contributors to higher education The library is the door that opens the world…

With an enormous geographical base and a huge amount of human resources from different ethnicities and walks of lives, India can never ignore the contributions…

The virtually-conducted placement week at IIM Calcutta, which ended on March 3, saw over 530 job offers for the 467 students KOLKATA : The 2021…

New Delhi: Parents aspire to provide the best for their children. We must pay special attention to financial planning for their higher education. Rising education costs…

LIVE JEE Main 2021 Result: The long wait is all set to come to an end as National Testing Agency (NTA) may release the JEE…

COVID-19 saw universities across the globe shift to fully online delivery as campuses locked down. Australia was no exception. For Australian institutions which had previously…