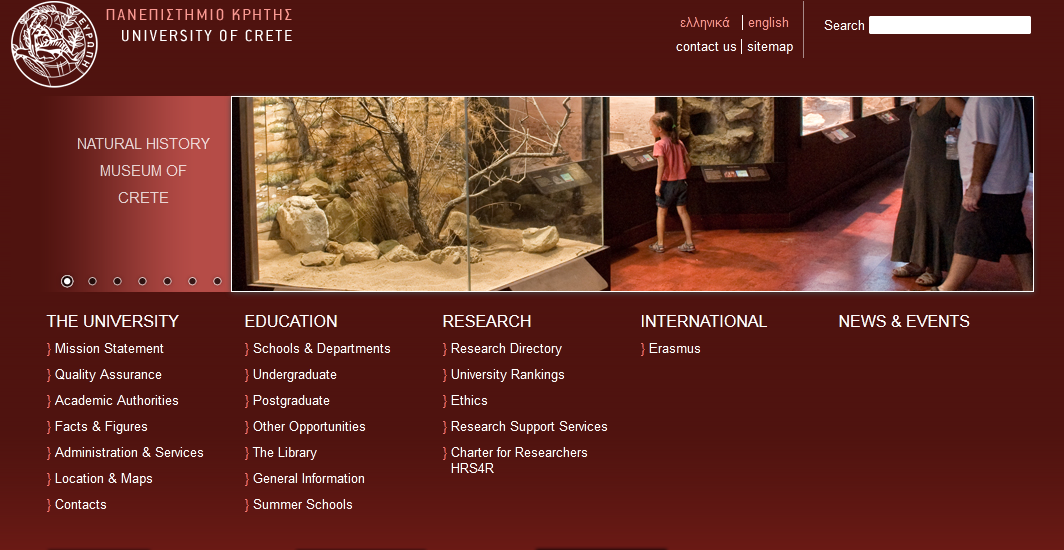 The University of Crete (UoC) is a young public education institution, sited in a region rich in ancient and modern Mediterranean cultures. Established in 1973, the university accepted its first students in 1977-78. Currently about 14,000 students study here through the faculties of Philosophy, Education, Social Sciences, Sciences and Technology, and Medicine, taught by an outward looking academic staff committed to excellence in research and teaching. Research activity benefits from close collaboration with the Foundation for Research and Technology – Hellas (FORTH), the Institute of Marine Biology, Biotechnology and Aquaculture (IMBCC), and the University General Hospital, and is reflected in collaborations with institutions worldwide.

National and Kapodistrian University of Athens

The National and Kapodistrian University of Athens, founded in 1837, is the first university not only in Greece but also both the Balkan peninsula and the Eastern Mediterranean region. The National and Kapodistrian University of Athens is the largest state institution of higher learning in Greece, and among the largest universities in Europe. It is a self-governed legal entity of public law and all major policy issues are determined by the Ministry of National Education and Religion. Retaining its academic autonomy, it fully respects the constitutionally secured right to everyone for a free education. This is possible because it is funded by the state. All funds are invested into the management and operation of educational, research and cultural programmes, and student and staff services and grants. 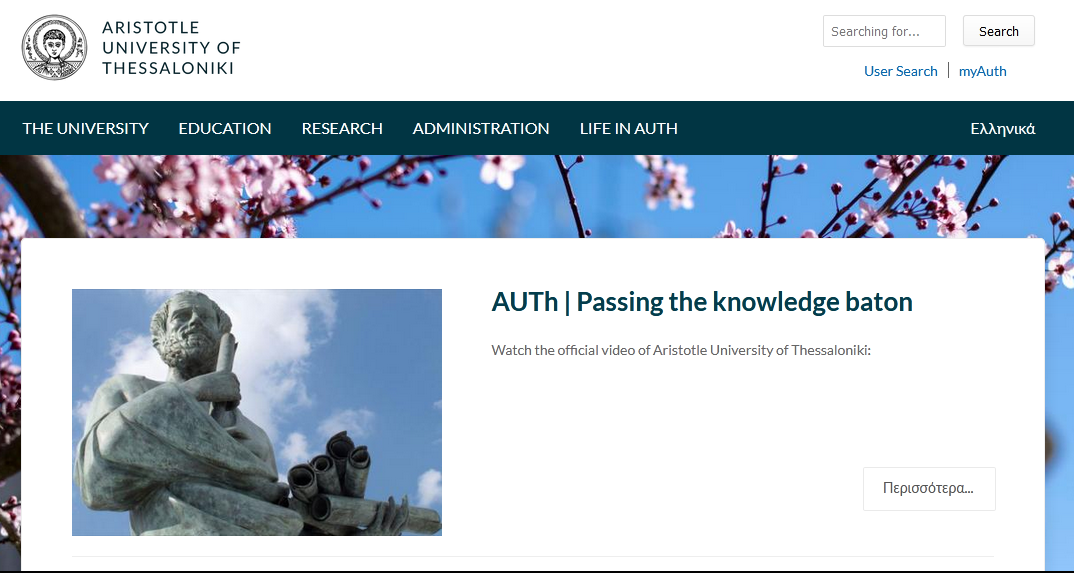 The university was founded in 1925 with a special emphasis on humanities. Its first department to be established was a Philosophy Faculty, which opened its doors in 1926 and was quickly followed by a mathematics and science faculty in 1927.

Over the years, the number of disciplines has grown, with the university now organised across twelve separate faculties, offering a large and diverse academic portfolio.

The university has a strong international reputation and boasts a longstanding association with the international exchange Erasmus Programme.

The institution is unique in offering courses in Modern Greek language and Greek culture to international students who wish to learn Greek as a language or study. Affiliated with the university is the Institute of Modern Greek Studies, which seeks to promote education through its publishing arm that produces books concerning Greek language, philology and literature.

Cultural activities offered to students at the university include an internationally-performing orchestra and abundance of clubs and societies. ‘Student Week’ s a cultural event organised annually on campus, which, despite its name, usually lasts for up to a month involves dance, music, theatre, cinema, sports and literature. The events is not limited to students and all citizens of Thessaloniki can attend.

The university’s main campus is in the centre of the city and covers an area of over 33 hectares, with some educational and administrative facilities located off campus and outside of Thessaloniki.

Its facilities include a university farm, a wildlife museum, a botanic garden, a centre for Byzantine Research, a seismological station and a meteorological station on Mount Olympus, the highest mountain in Greece.

For five decades, the University of Ioannina has been committed to the creation and transmission of knowledge, to innovation and cooperation on a regional, local and international level. Currently, the university has 15 departments. The schools of the University of Ioannina are as follows: Philosophy; Health Sciences; Education; Economics and Social Sciences; and Architectural Engineering. The student organisations and the university facilities (dining hall, indoor gym, running track and football grounds, university library and information centre, computer centre and network operation system, international centre of Hellenic education, culture and vocational training, university conference centre, centre of career development and employment ) in combination with the numerous multicultural events guarantee an academically rewarding study at the University of Ioannina. 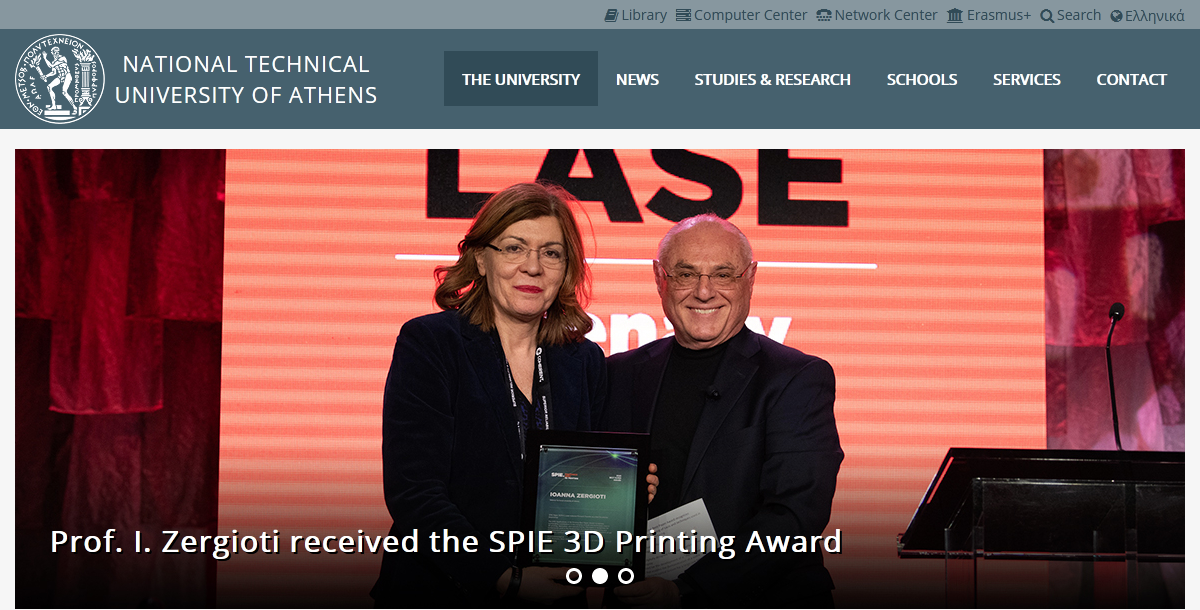 A state institution better known as Athens Polytechnic, the National Technical University of Athens history is as entwined with Greece’s political history as its academic heritage.

Founded in 1837 as the Royal School of Arts, it took the polytechnic title in 1862 and in the early 1870s moved to the Patision complex in the centre of Athens. This site became renowned as a centre for the Greek resistance under Nazi occupation during the Second World War and, in 1973, for the uprising which signalled the overthrow the following year of the “Colonels” military dictatorship.

There is a monument to the 23 killed in the uprising on the campus, while the colourful graffiti of the surrounding district testifies to a continuing political ambience.

While the school of architecture continues to operate from the neo-classical buildings of the old campus, the other eight schools, seven of them varieties of engineering, are based on the 190-acre Zografou campus.

Students are recruited via Greece’s school-leaving examination, most scoring in the top five per cent. The university is believed to have produced around 40 per cent of Greece’s active engineers.

Ranked fifth in the Nature Index for Greece for 2018, it had six physicists listed in a survey of the 200 most cited scientists in the world. A number of current researchers lead a European Union project seeking pathways to a low carbon economy, and are heavily involved in the Fit4Reuse programme, led by the University of Bologna, aimed at finding unconventional water resources for agriculture in Mediterranean countries. 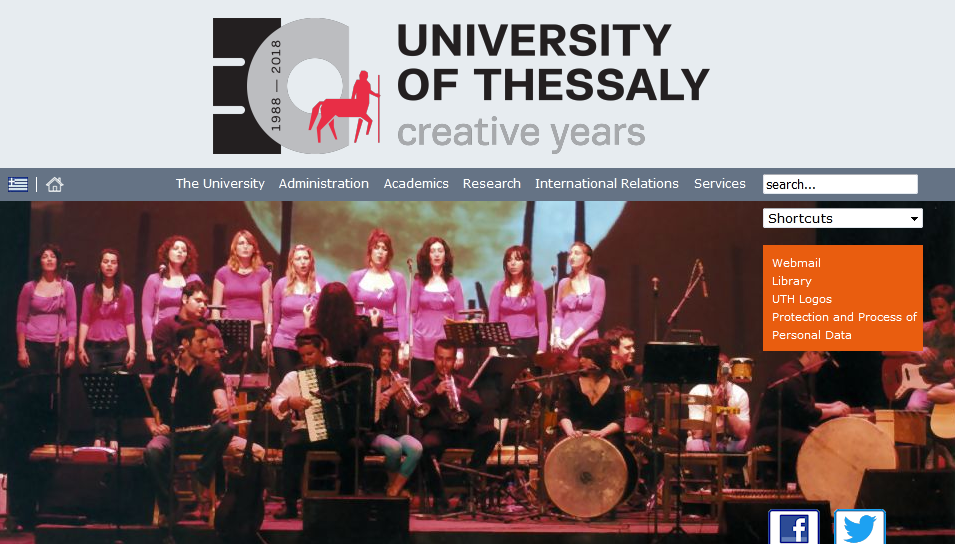 A public institution founded in 1984, the University of Thessaly is a multi-site university serving central districts of mainland Greece. It has grown steadily from its roots in Volos, where the administration still operates from buildings on the seafront, to establish campuses in Karditsa, Larissa, Trikala and Lamia.

Expansion to the point of having close to 18,000 students enrolled in 2016, around one in six of them postgraduates, has been accompanied by organisational stability.

All six faculties and 18 departments were in operation by 2001, but physical expansion was enabled by taking over the computer science department of the defunct University of Central Greece and the Lamia campus of the former Technical Education Institute of Central Greece.

Its declared mission is “the promotion of scientific knowledge through research and the contribution to the cultural and economic development of the local community and society”. There is no single main campus, but buildings spread across Volos vary from the modernity of the Department of Planning and Regional Development to the former water pump factory accommodating architecture, civil engineering and mechanical engineering.

The Medical School, which includes a hospital that serves the region is based in Larissa; physical science, sports and dietetics are at Trikala and veterinary science along with 52 hectares of farmland at Karditsa.

The Univerity of Thessaly is the lead partner in the 28-member EU-funded academic consortium running the PerformFISH project to enhance sea bream and sea bass aquaculture in the Mediterranean.

University of the Aegean

The University of the Aegean is spread across six scenic islands, forming a network covering all prefectures in the Aegean Archipelago, with the central administration being situated in the hills of Mytilene, the capital of Lesbos.

Though the university was only founded in 1984, its origins can be traced back to 1919, when a plan was made for the creation of a new university in Greece. The aim was to improve education opportunities outside of Athens, which was then the only educational centre in the region. It was to be called the Ionian University, but after the Greco-Turkish War of 1919 – 1922, it never opened. All those years later, the University of Aegean was created as a continuation of this initial vision.

Created with the aim of introducing new approaches to higher education through interdisciplinary subject areas to fit the needs of the contemporary world, many of the courses cover new scientific domains, with names such as Communication Systems, Cultural Informatics, Education Design, and Mediterranean Studies. Postgraduate programmes, aimed at an international level, fall under such subject areas as European Integration, Biodiversity, and Environmental Policy and Management.
While most courses are taught in Greek, there are some bilingual MSc programmes, and personal support may be offered in languages such as English, French, German, or Turkish. Since 2004 the School of Social Sciences has hosted Modern Greek language classes throughout the academic year.

Athens University of Economics and Business

Athens University of Economics and Business (AUEB) is the oldest educational institution in Greece in the fields of economics and business administration at both the undergraduate and the postgraduate levels. Thousands of its graduates are high-ranking administrative and financial executives in the public and private sectors of the economy, faculty members in Greek and foreign universities, and members of international organisations. AUEB is the top university in Greece and one of the best universities internationally in the fields of science that it covers. It has eight undergraduate departments and 32 full- and part-time postgraduate programmes.

The University of Patras, founded in 1964, is the third largest university in Greece and includes 24 multidisciplinary departments divided between five schools.

While it was originally set in the centre of the city of Patras in western Greece, today the main campus is located on a 600-acre wooded area in the Patras suburb of Rion after land was appropriated for the university shortly after it was founded.

The campus now hosts a conference centre, a number of museums and the Regional University Teaching Hospital as well as sports facilities, cafeterias, student halls of residence and lots of other services that make the campus very self-sufficient. There is also a satellite campus in the city of Agrinio, around 80km north of Patras and the University of Western Greece was incorporated in the University of Patras in June 2013.

The university’s emblem, Andrew the Apostle, was chosen after the University was officially opened on November 30, 1966, the same day that the city of Patras celebrates its Patron Saint, Andrew. 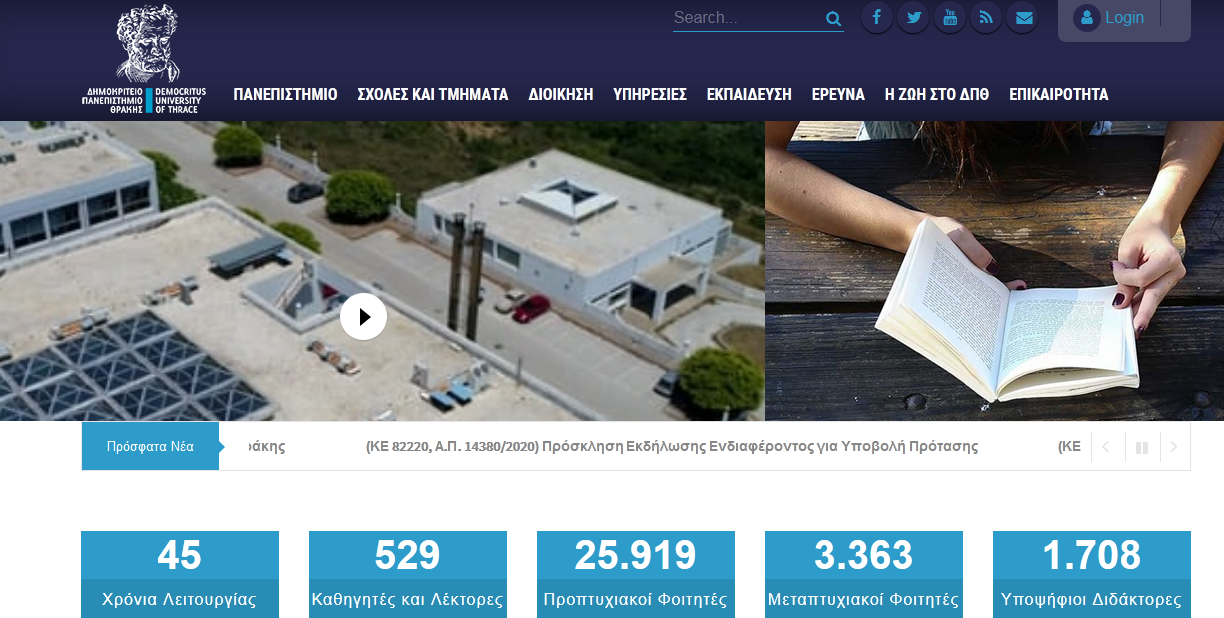 It was named after the ancient pre-Socratic Greek philosopher Democritus who was born in the city of Avdira. He is primarily remembered today for his formulation of an atomic theory of matter.

Its nucleus based in Komotini, Greece and two faculties and 20 departments in four Thracian cities – nine in Komotini, five in Xanthi, four in Alexandroupoli and two in Orestiada.

Democritus University of Thrace is based in Komotini, a city in the region of East Macedonia and Thrace, northeastern Greece and is home to a sizeable Turkish-speaking Muslim minority.

The Democritus University’s presence makes Komotini home to thousands of both Greek and international students, and this factor, combined with the eclectic mix of Western and Oriental aspects of the city’s quotidian life, make it an increasingly attractive tourist destination.

uLektz Wall of Fame An initiative to identify, recognise & award the contributors to higher education When it comes to femininity, in the past decade…

uLektz Wall of Fame An initiative to identify, recognise & award the contributors to higher education The library is the place where students and faculties…

uLektz Wall of Fame An initiative to identify, recognise & award the contributors to higher education The library is the door that opens the world…

With an enormous geographical base and a huge amount of human resources from different ethnicities and walks of lives, India can never ignore the contributions…

New Delhi, March 4 The UK will open the ‘Graduate Route’ for applications from July 1. The Graduate Route is for international students who, after…

The housing market can be overwhelming and anxiety-inducing for students, especially those in the first year – just two or three months into living independently…

The University of Bristol and Christ University in India have formally teamed up to collaborate, focusing particularly on the fields of social sciences. Under the…