Students’ choice of selecting a university abroad depends heavily on employability opportunities. Every year “The Times Higher Education” releases ranking lists for universities around the world. The ranking is based on 13 performance indicators that measure the institution’s performance across teaching, research, knowledge transfer, and international outlook.

Jagiellonian University (JU) is a public higher education institution. First founded in 1364, JU has been an integral part of Kraków for 650 years. Today’s JU links tradition with the challenges of the modern world. With 4,063 academic teachers and almost 500 distinguished professors, JU provides more than 100 professionally focused course areas in the most notable fields. For the past few years, JU has consistently occupied top positions in various rankings of the best universities in Poland.

The University of Warsaw is Poland’s largest university, and one of its most prestigious.

It offers courses in humanities, social sciences and natural sciences, as well as a range of interdisciplinary programmes.

While most teaching is in Polish, the university offers more than 20 programmes which are taught in English, including economics, business, and political science.

Students at the institution also have the opportunity to take courses in one of 36 languages which are on offer.

Warsaw is an international university, with thousands of foreign students, researchers and academics, including those participating in the European Union’s Erasmus programmes.

The heart of the university remains its historical main campus, in the centre of Warsaw, which includes buildings dating back to the 17th century. The natural sciences campus is more modern.

The history of the university itself stretches back to 1816, when it was founded by a decree issued by the Russian tsar, Alexander I.

This first iteration of the institution lasted only 15 years before it was closed, amid growing clamour for Polish independence from Russia. Amid temporary liberalisation, the university was reopened in 1862, but was then closed in 1869 and was replaced with the Imperial University of Warsaw, a Russian-language institution.

It was not until 1915 that the Polish university was reopened, this time under German rule and subsequent independence. The university was again closed under Nazi rule in the Second World War, but many academics risked their lives to continue their teaching in secret.

Other notable alumni include the composer Frédéric Chopin and David Ben-Gurion, the founding Prime Minister of Israel. 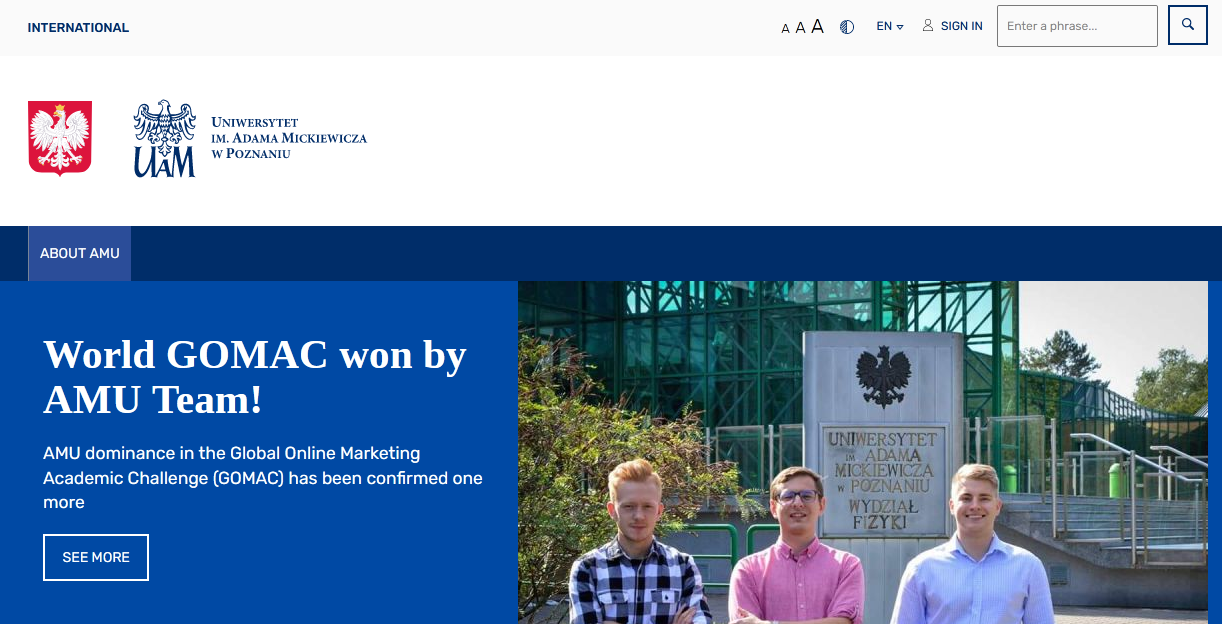 Adam Mickiewicz University is one of Poland’s top universities. Its reputation has been founded on tradition, the achievements of its academic staff and an attractive curriculum. Among its more than one hundred honorary doctors are four Nobel prizewinners: Maria Curie-Sklodowska and Wisława Szymborska, Javier Solana and Pope John Paul II. It has about 3,000 faculty members, of which 750 are full and associate professors. More than 150 visiting lecturers and professors come from abroad. The university has also entered into about 250 partnership agreements with academic institutions from around the world. The university has more than 37,000 undergraduate, graduate, PhD and postgraduate students in its full-time and part-time programmes.

Gdańsk University of Technology (GUT) is a fully autonomous state university. It continuously develops and pays attention to providing the highest quality education in order to meet the needs of the dynamically developing economy and society. The university undergoes a cyclical accreditation assessment.

There are nine faculties, 37 first and second cycle study programmes, including 18 fields of study and specialisations in English. There is also a doctoral school offering studies in three fields of science under which 12 disciplines of science are available to choose, one MBA course accredited by AMBA. There are nearly 77 hectares of university campus, over 2,300 places in 11 students halls of residence and more than 15,000 students.

AGH University of Science and Technology

The AGH University of Science and Technology conducts research at a world level in different fields and disciplines of science. This forms the basis for a high level of education and the development of university staff, which are fundamental to how the university operates and its reputation. The university’s curriculum encompasses 59 fields of study, including more than 200 specialisations, run at 18 faculties. Education in English is offered in 17 fields of study. 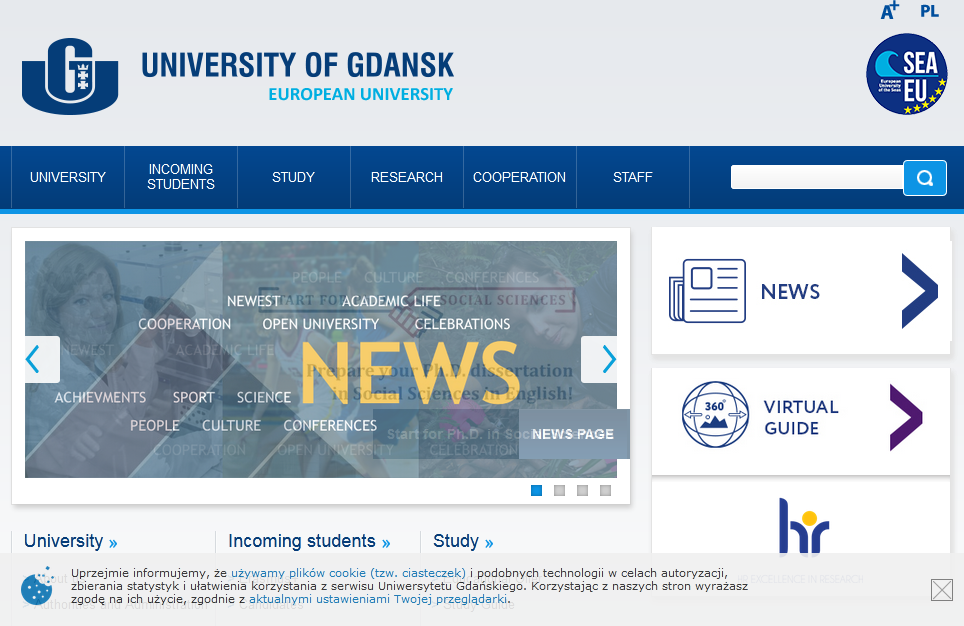 Formed as the result of a merger between the Higher Economics School in Sopot and the Higher Pedagogical School in Gdańsk, the University of Gdańsk (UG) was officially founded in 1970. It also later included the Higher Teacher Training School and has now become the largest educational establishment in the Pomerania region.

There are 11 faculties at UG and it has gained recognition across Poland for its study of biology, biotechnology, economic sciences, law, psychology, pedagogy, quantum physics, oceanography and chemistry. It also leads an important centre for the study of the Kashubian language, a Pomeranian dialect belonging to the Lechitic subgroup.

UG’s buildings and scientific research stations cover a large swathe of the Polish coast, spreading from Gdańsk to the Hel Penisula. The majority of its faculties are located in the metropolitan areas of Gdańsk, Gdynia and Sopot (known collectively as Trójmiasto). The majority of the students and staff members are based at the Gdańsk Oliwa Campus.

The university’s marine facilities – the Hel Marine Station of the Institute of Oceanography, the Bird Migration Research Station and the Biology Station – have gained a reputation internationally. Known for its research into the protection of life in the Baltic Sea, the Hel Marine Station works to restore threatened species like the grey seal and the harbour porpoise.

The University of Gdańsk has established links with some 120 university-level institutions across Europe and around the world.

Notable alumni include Donald Tusk, former Prime Minister of Poland and the President of the European Council. 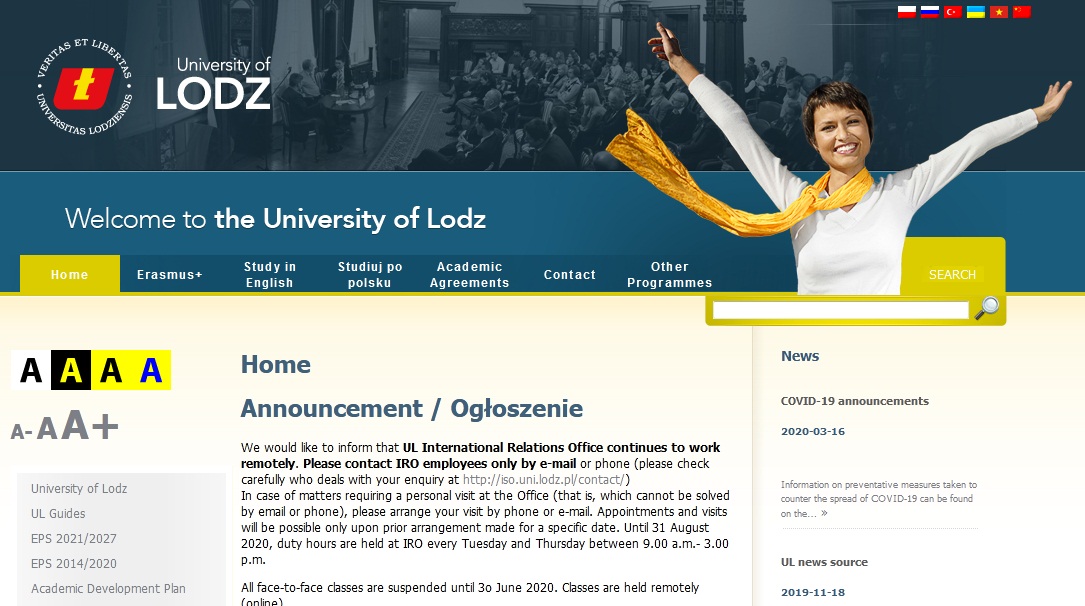 The University of Łódź was established on May 24, 1945, just a few weeks after the end of the Second World War in Europe. It was formed through an amalgamation of the educational institutes operating in Łódź and today it is a highly regarded university in Poland.

The university operates 12 faculties that are located throughout Łódź, Poland’s third-largest city. The university campus has a large number of dormitories to accommodate students as well as modern sports facilities and an array of entertainment options. The University of Łódź is also home to one of the largest academic libraries in Central Europe, which houses around three million books.

It is also considered a very international university, with foreign nationals making up a considerable proportion of the 38,000 students currently enrolled. Furthermore, the university offers degree courses in Polish, French, English and Russian languages, as well as the longest-running School of Polish for Foreigners in the country, which was first established in 1952.

International relations are central to the philosophy of the University of Łódź, and as such the university has agreements in place with over 200 higher education institutions all over the world, while the university is also part of the Erasmus student exchange programme. The university has cooperation agreements in place with ten universities across the world, including institutions in France, Finland, Germany and the United States, that allows University of Łódź students to graduate with dual diplomas.

Lodz University of Technology (TUL) was founded just weeks after the end of the Second World War in 1945. The opening of TUL was the culmination of nearly eight decades of campaigning by industrialists in the town. The textile industry in Lodz had made the city one of the largest in Poland and there was some demand for technical instruction in the town. TUL began its first year of operations in a converted wool mill, with just over 500 students.

Today, the institution has around 18,000 students and around 1,500 faculty members. Many of the courses provided by its nine faculties are still taught in converted factory buildings from the town’s industrial past.

The university has a small international student population and courses at the International Faculty of Engineering are taught in both English and French. Students can gain double diplomas at TUL and one of a number of partner institutions in France, Finland, Denmark, Great Britain and the Netherlands.

In 2016, TUL was awarded the HR Excellence in Research certification by the European Commission. The university’s focus in its research is on advanced technologies of sustainable development, with this divided into six smaller areas: advanced materials technologies; energy, environment and infrastructure; information technologies; production, human resources and finance management systems; industrial biotechnology; and biomedical engineering.

TUL is one of three state-owned universities in Lodz along with the University of Lodz and the Medical University of Lodz. There are also several other higher education institutions in the city. The Polish government is set to test a new superfast 5G mobile network in the city and TUL will make space on its campus for startups looking to try out the new technology.

The Nicolaus Copernicus University in Toruń (NCU) was established in 1945 and today stands as one of Poland’s largest higher education institutions. It is named after Renaissance mathematician and astronomer Nicolaus Copernicus, who was born in the city of Toruń in northern Poland.

Today, almost 30,000 students are enrolled at NCU. Comprised of 16 faculties offering courses in 80 different fields of study at undergraduate, master’s and doctoral level, the university has grown significantly in recent years. Most of the faculties are located at the Toruń Campus, although a lot of the medical facilities are located at the university’s second campus in the nearby city of Bydgoszcz.

International relations remain central to the NCU philosophy and along with the Erasmus programme, the university has established bilateral agreements with institutions all over the world. Individual departments also establish their own international partnerships, and the Faculty of Economics having worked extensively with universities in France, while the History department has collaborated with a Moscow University.

Some of the research facilities at NCU are considered to be among the best in Poland. The Centre for Astronomy is home to a 32-metre radio telescope, and among the university’s alumni are astronomers Maciej Konacki and Aleksander Wolszczan.

Other notable former students of NCU include the poet Zbigniew Herbert and ethnographer Jan Rompsczi. The former head of the Polish Intelligence Agency Zbigniew Nowek, and the CEO of railway manufacturer PESA, Tomasz Zaboklicki, also studied there.

University of Silesia in Katowice

The University of Silesia in Katowice is one of the largest public universities in Poland. Founded in 1968, the University of Silesia quickly established itself a reputation as a vibrant academic institution and an important interdisciplinary research hub. With a tradition of launching new programmes to best meet the needs of rapidly changing labour markets, the University of Silesia offers students a variety of programmes and specialised fields of study. We actively participate in European Commission initiatives focused both on educational and scientific development, and realise projects within the Lifelong Learning Programme, the Research Fund for Coal and Steel and Framework Programmes. Every academic year we offer more than 70 programmes and more than 200 specialisations that are designed to help our students and alumni meet the challenges of a changing labour market. We have signed more than 600 cooperation agreements with academic institutions all over the world, and we are a member of numerous international associations such as the European University Association (EUA), the Heads of University Management & Administration Network in Europe (HUMANE), the Interuniversity Centre for Research and Cooperation with Eastern and South-Eastern Europe (CIRCEOS).