As the COVID-19 pandemic forced schools to shift classes online, an app developed by two Indian Institute of Technology-Bombay (IIT-B) students is helping children from Jammu and Kashmir access video lessons, despite the states’ connectivity being limited to 2G network.

‘Wise App’, is a 2G friendly video interface online class application, developed by IIT-B students – Bilal Abidi from Lucknow and Mubeen Masudi from Kashmir. They were also lauded by Education Minister Ramesh Pokhriyal Nishank, who in a Twitter post hailed the duo’s app as “extremely user friendly, completely free and without advertisements.” 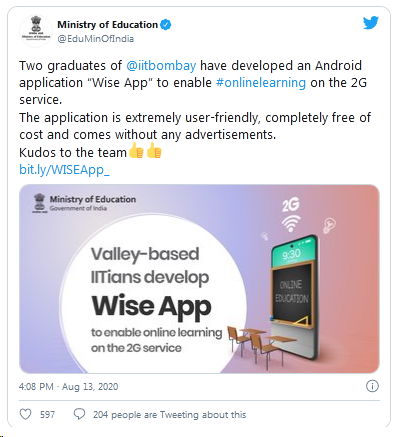 Launched in August 2020, the app also featured on the Centre’s 74 years, 74 series campaign and is now used by 3,000 teachers, a majority of them based in the north-most Union Territories, the Indian Express reported.

Like the rest of India, educational institutes in the UTs were forced to move online due to COVID-19, and tech-savvy aside, teachers also faced the barrier of slow internet speeds (2G bandwidth) which did not allow for use of mainstream options such as Zoom, the report noted.

Masudi told the paper they realised that teaching was “more than just live classes” and while everyone was fixated on live classes and online access, “other important aspects such as assignments, testing, content-sharing, and clearing of doubts took a back seat.”

“Consequently, most students have been receiving inadequate or discontinuous education since March. As a teacher, I realise that for great learning outcomes, quality as well as continuity of education is very important,” he added.

He added that need for a platform arose as existing solutions were not accessible to students with low bandwidths.

CS Paul, vice-principal of Lucknow’s Unity College told the paper the app has eliminated need for “30-35 WhatsApp groups which were earlier used to coordinate next day’s classes” and said it has especially been helpful as 90 percent students did not have laptops.

“There was a need for an application that could reach the largest numbers of students on mobile phones,” Paul acknowledged. On the privacy front he said Wise does not share the details of students with everyone and tracks attendance by numbers and duration.

Masudi and Abidi say the app is a way to “democratise education” through technology and hope it allows education access to all regardless of connectivity or internet speeds.