Sewing a New Future, a story of upskilling rural women towards self-employment.
Skip to content

Priyanka Sharma, a 30-year-old woman, from Khatnai village in Godda, Jharkhand, is busy sewing school uniform shirts on a Usha industrial sewing machine. She is one of 150 women working at a sewing centre in Sikitiya village, Godda—an Indian district close to the border with Bangladesh. These women are all members of a self-help group they formed three years ago.

Putting her smartphone aside, Priyanka begins to narrate her climb out of grinding poverty. Semi-literate, having studied only till Class 8, she now speaks with the confidence of a woman who has wrestled with difficult times and come out victorious.

Poor families in need of self employment

Until a few years ago, Priyanka was living in a house with a thatched roof, no electricity, running water, or even a toilet.  There were days when she did not have enough to feed her family of three children and her handicapped husband, Munna Sharma. He was the family’s sole breadwinner and was earning a daily wage on a construction site in Pune. In 2014, a speeding vehicle ran over him, incapacitating him for life. As the family-owned no agricultural land or asset of any economic value, Priyanka found it hard to even put food on the table for her two kids—who were then just 3 and 2 years old.

“I used to do some sewing work, but what I earned was not enough,” remembers Priyanka as she breaks down recalling her bleak past. Less than 2 km from where Priyanka lived was the dilapidated dwelling of 46-year old Sangam Jha. Her husband was suffering from blood cancer. There was only a small government hospital in Godda and anybody suffering from a serious ailment in the district was compelled to travel either to Patna, Ranchi or Kolkata—all located over 300 km from Godda.

Sangam decided to get her husband treated at a cancer hospital in Kolkata. She was an agricultural labourer and had to feed her two children and pay for her husband’s medicines and bus fare to Kolkata.  But work was hard to come by. Years of grinding poverty had her left her infirm and underweight and she couldn’t do any hard manual labour.

The story of Priyanka and Sangam are representative of the lives of women in Jharkhand, one of the most backward states in the country. More than 50 per cent of the adult population is dependent on agriculture for livelihood.

Living on the margins and the rising need for Upskilling

A majority of the farmers are small and marginal who cultivate their fields for a few months annually and for the rest of the year, work as casual labourers, often in distant places.

Even the families who have land to till are mainly engaged in subsistence farming—the harvest is just enough to feed them. Then a large number of rural families have no agricultural land. Women either tend to household work or are daily wagers, in fields or brick kilns, or tend to cattle. Those who can’t find work in the state migrate to big cities, working as maids or daily wage construction workers.

Out of the 24 districts in the state, 19 are categorised as extremely backward–the districts located in the northwest and northeast of the state are especially poor.  Godda is in the northeast and is in the lowest rung of all human development indices. Tribals are 21 per cent of the population and are mostly illiterate, desperately poor and backward. But of late, things are beginning to change.

Even as the country is in the midst of the second wave of coronavirus, putting millions out of employment and triggering a mass exodus of labourers from urban to rural India, hundreds of rural women are successfully fighting their way out of the poverty trap.

With a small but targeted support from central and state agencies and private foundations, hundreds of families led by the women of Godda are getting a firm foothold on the ladder of development.

Also Read: 5 upskilling courses in India to make you job-ready

In early 2017, the state government started an ambitious programme of training local women on industrial sewing machines so they could sew clothes at an assembly-line pace. Private foundations and government agencies joined hands to create a rural infrastructure in skilling and self-employment.

Twelve sewing centres in three of the most backward blocks in the Godda district–Godda, Poriyahat and Sunderpahadi (the last two are tribal-dominated blocks) were established. They were equipped with semi-automatic machines, electricity generator sets, raw materials like cloth, wool, thread, buttons and needles.

“The women here are rural. Most of them had to be really persuaded to join the skilling centres. We told them that even if they didn’t get paid work after learning the job of sewing, at least they would be able to stitch the clothes for themselves and their family,” said Shanta Devi, from village Motia, Godda, who was among the first to come forward to join the programme.

Devi’s house, like many others in Motia village, had no toilet or drinking water facility. Her husband took private tuitions, earning not more than Rs 3,000-4,000 a month. She had two children whom she wanted to send to a private school, but there was never enough money to afford anything besides food. “I always wanted to do some work to support my husband. But there was just no opportunity,” said Devi. 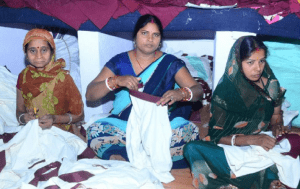 Women like Priyanka Sharma, Sangam Jha and Shanta Devi who had nothing to lose, joined the sewing training centres in Godda.

By the end of 2017, around 800 women were training at 12 different centres in Godda. In 2018, the number swelled to 1,200. The National Development Skill Corporation (NSDC) collaborated to award these women the skilling certificates after successful completion of the six-month training programme.

But there were many months of idleness and anxious wait between the completion of the training and the start of earnings. “For many months after the training, we were sitting idle. Then we decided to organise ourselves into an organisation,” said Devi.

In December 2018, the Godda women organised themselves into a self-help group (SHG) named after two local historical figures —Pholo and Jhano—two women warriors who had fought against the British and local moneylenders.  Devi became the secretary of the group.

PJSASM, the self-help group, was asked to provide two sets of school uniforms (which included two shirts and two pairs of pants for boys and two salwar kameez sets for girls), at the rate of Rs 376 per student.

Until now, the administration was procuring school uniforms by giving out the order to out of town vendors. Impressed by the facilities and capabilities created by the Skill Development Centres, the administration took a leap of faith and decided to give the women’s health group a chance. The contract was worth Rs 6.10 crore.

“We were over the moon after receiving the contract. But we had no source of income and therefore, we had no capital to invest. The challenge was how to begin the work. Then a private foundation gave us 150 industrial sewing machines, following which the district administration gave us 30 per cent of the contract value as advance payment to enable us to begin the work,” said Devi.

But realistically, the contract didn’t seem commercially viable. Textiles and other materials needed to stitch the uniform itself involved a substantial cost. Then there were the additional expenses of electricity, diesel generators (power supply was erratic and a diesel Genset was necessary to operate a workshop), sewing machine maintenance and repair cost, transportation, distribution and administration costs. Would there be anything left over to pay their wages, wondered these women.

But they also knew that this contract was the last glimmer of hope for hundreds of women. So PJSASM decided to take the contract. They procured cloth from Surat and other material like thread, buttons, hooks, collar and zips from Kolkata.

“It was a huge challenge. We motivated the women to come forward and finish the task. All of them worked from 8 am till 6:30 pm. Even during lunch break, they would race to finish their food fast so that they could get back to stitching the uniforms,” said Lucy Devi, another local woman, who also acts as PJSASM president.

The task before them was not only to stitch three lakh sets of school uniforms of good quality and deliver it to the district administration on time, but also to save some money with which they could run their households and set aside some for the self-help group to become commercially sustainable.

By the end of September 2019, over three lakh uniforms were delivered to district authorities. These were then distributed to the beneficiary children well ahead of the new academic year. A bunch of poor, semi-literate women not only managed to complete the project well ahead of time, but they also earned a total income of Rs 1.41 crore.

With one project successfully completed, the Godda women decided to take their next leap of faith—to become entrepreneurs. With Rs 33 lakh of savings and a Rs 20-lakh loan from Canara Bank, PJSASM decided to open a centre entirely with their money in Sunderpahadi, a tribal village. While the district administration provided the building, the Godda women purchased 33 computerised flat knitting machines and raw material from Ludhiana, Punjab.

PJSASM then decided to aim higher. They went back to the district administration seeking a bigger contract. In October 2019, an MoU was signed between Sarv Shiksha Abhiyaan and PJSASM, under which the self-help group was given the job of providing school uniforms to Godda school children for five years.

In November 2019, the district administration asked them to not only stitch school uniforms but also to supply a pair of shoes, socks and a woolen pullover for each student. The contract was fixed at Rs 600 per student for nearly 1.5 lakh school children in the district.

PJSASM started placing orders for the supplies needed for this new contract. By March 2020, they had stitched uniforms for students of Class I and Class II. They procured shoes from Delhi and socks from Kolkata. At their newly built Sunderpahadi centre, the women started stitching sweaters.

Even as the excitement of the five-year MoU and the second contract was running high, the pandemic struck. On March 24, 2020, the government imposed a nationwide lockdown. All 18 sewing centres were shuttered.

But not for long. In April 2020, district officials reached out to PJSASM. They desperately needed masks. “In the market, masks were very costly. Officials wanted three-layer cotton masks to be stitched for distribution among the masses,” said Devi.

PJSASM got the work order to produce 1.57 lakh masks and had to supply them to the administration within 15 days. Two hundred women swung into action and delivered the masks within a fortnight. PJSASM was paid Rs 15.7 lakh (Rs 10 per mask). By June-end 2020, the lockdown ended, and the stitching and sewing work of school uniforms restarted. The Godda women completed the second contract by November 2020, earning a net income of Rs 1.71 crore from this second contract.

It has been a long and arduous road for these women, but well worth it.

The article was originally published in The Leaflet.