Jordan University of Science and Technology

Located in the dynamic city of Irbid, Jordan University of Science and Technology (JUST) is one of the leading research universities in the Middle East. Founded in 1986, the university was originally founded in order to produce a local workforce skilled in meeting the needs of the region.

Since its establishment, the university has developed a reputation for excellence and was recently named the best scientific institution in the Kingdom by Jordan’s King Abdullah II.

Student numbers have seen rapid growth in recent years, with around 20,000 undergraduates and 1800 graduate students, compared with a total student body of 2,300 in 1986.

Approximately 5,000 international students representing over 60 nationalities are among its cohort, making JUST the most culturally diverse university in Jordan, with most of its programmes taught in English.

Its international standing extends to strategic links with several partner institutions in America, Europe, Canada, Australia and the Middle East.

JUST comprises 12 faculties ranging from medicine to arts to sciences, and many degree programmes are exclusive to the university. Programmes are subject to constant review and are adapted to meet changes in industry, ensuring that students graduated skills and knowledge relevant to the workplace.

The university has been granted special recognition for its developments in medicine, with teaching taking place in the King Abdullah University Hospital, one of the largest hospitals in the country. The university’s Faculty of Medicine also hosts a number of international events and conferences each year and plays an active role in medical research.

Among the university’s facilities are twelve auditoriums and a number of museums and fine art galleries. It also houses a range of sporting facilities, including a 7,000 seat football stadium.

First established in 1997 by royal decree, Al-Balqa Applied University is a state-sponsored university spread over all Jordanian governorates with its main campus located in the Jordanian city of Salt.

The university is a strong advocate of education for future solutions, and its vision is to become a scientifically leading and globally competing applied university, distinguished in creativity, innovation, applied scientific research and leadership for the purpose of contributing to knowledge economy and society.

The university fosters quality scientific research, enjoys strong international relations with many universities, research centers, industries and other partners and has skilled and highly competent alumni working both domestically and abroad. The university is also home to top-notch academics in a wide variety of disciplines and is the destination of choice to students from all over the world.

Al-Balqa Applied University offers a large number of academic programs at both the undergraduate and postgraduate level. Its expansive campus across the country allows it to maintain a number of faculties across a diverse range of subjects, including medicine, engineering, applied science, agriculture and management, to mention but a few.

The central campus is located in Salt city which is home to a number of important cultural and historical sites, dating back as far as the Roman, Byzantine and Mameluk periods. In addition to Salt’s own historic importance, the city is a 20-minute drive from the world’s lowest point, the Dead Sea, and is a short distance from the holy baptism site of Jesus Christ along the east bank of the Jordan River. On a sunny day, Salt offers a breath-taking view of the holy city of Jerusalem.

In addition to Al-Salt’s prime location, Al-Balqa’s affiliate colleges across the kingdom also offer quality education and a unique opportunity to explore the richness of Jordan’s sites. Aqaba University College, located in Jordan’s most southern region, and only port, for example, offers both maritime transport technology programs and a chance to explore the coastal city of Aqaba, while Shoubak Agricultural College neighbors the spectacular Dana Biosphere Reserve, and Ma’an College is a short distance from the mesmerizing Wadi Rum and the world’s seventh wonders, the rose-red city of Petra. BAU offers a unique academic and cultural learning experience. 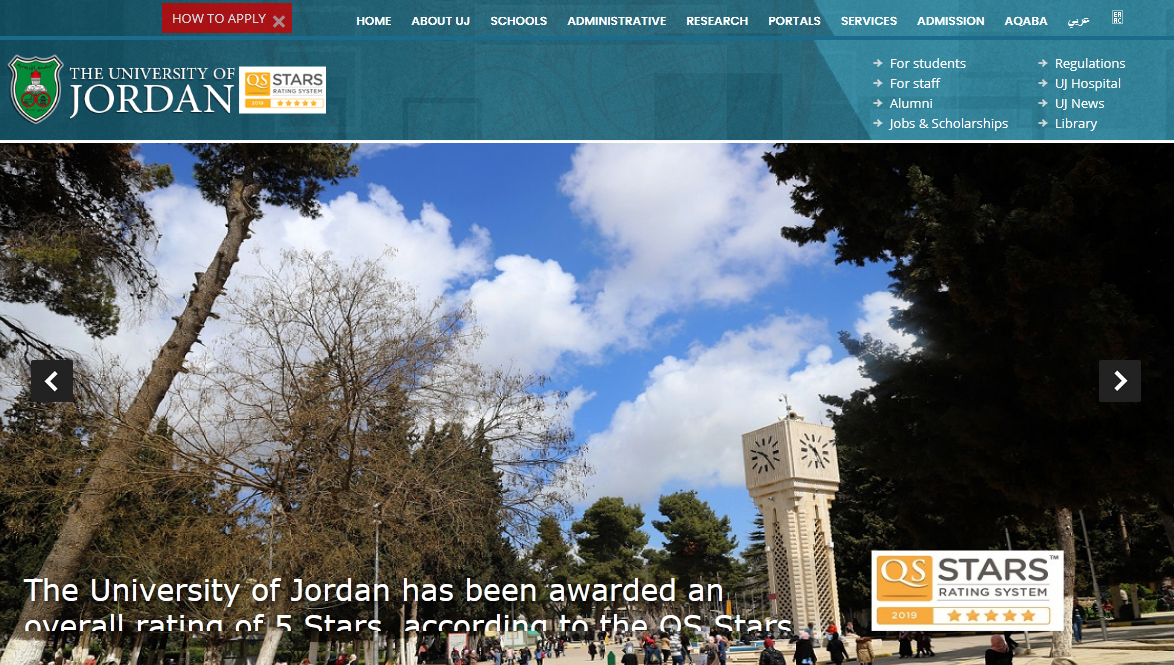 Located in the capital city of Amman, a popular destination for visitors to the region, the University of Jordan (UJ) was established in 1962 by royal decree. It is a state-funded university, and both the largest and oldest in the country.

Home to approximately 38,000 students, UJ offers around 60 undergraduate degree programmes. For post-graduates, there is the choice of 30 doctoral programmes, 81 master’s, as well as various professional diplomas and medical specialisations. The university is organised across 18 faculties and its hospital, established in 1973, is affiliated with the King Hussein Cancer Centre, the first JCI Disease Specific Certificate-accredited Cancer Centre outside of the USA.

Teaching at the University of Jordan – in its style and approach – combines traditional methods with modern tools. There is a focus on interactive and multimedia techniques and a big part of its mission is to incorporate fieldwork, practical training and applied research into its courses. Most programmes offered by the university include some or all of these components.

It is claimed that the highest number of researchers per million in the Arab world are located in Jordan. Among UJ’s 1,000-strong faculty are writers, analysts and literary critics, many of whom have taught at other universities in neighbouring Arab countries and around the world.

UJ’s campus is located in the Jubeiha area of the capital’s University District. Jubeiha is considered the centre of the district with five other areas surrounding it.

The Hashemite University is based in Zarqa in Jordan, and is a state-supported university with a comprehensive campus, which has been redeveloped in four phases – the last was completed in 2005 and exceeds 50,000 square metres.

What started out as four different colleges has expanded to fourteen throughout the years. The university has a variety of faculties which teach core subjects such as: arts, science, engineering, literature and many other buildings and related services. The university is said to have one of the strongest engineering schools in the Middle East.

The university offers students a cafe, swimming pools, and recreational areas – which offers ping pong and board games – as well as access to a village, which plays host to a large supermarket providing anything a student might need.

Yarmouk University, (abbreviated as YU) is a public state-supported university located near the city centre of Irbid in northern Jordan.

Since it was established by Royal Decree in 1976, Yarmouk University has topped the best university lists in Jordan and the Middle East.

The institution has an FM radio station that broadcasts 24 hours a day, seven days a week at the frequency of 105.7 FM, airing the news, music, political, social and academic programmes and the weather forecast. It also prints the Sahafat Al-Yarmouk newspaper.

All university buildings are located near the city centre of Irbid, the second largest city in Jordan.

Irbid, anciently known as Arabella is about 85 km (53 miles) north of Amman, situated at an equal distance from Pella and Umm Qais, and is a good base from which to explore the northern Jordan Valley or to start a trip to Umm Qais, Pella, Ajloun, Umm el-Jimal, or Syria.

Before the advent of Islam, Arabella was famous for producing some of the best wines in the ancient world. The area in the region had extremely fertile soil and moderate climate, allowing the growth of high-quality grapes. After the Muslim conquests, it came under the rule of the Muslim Empire, the city became known as Irbid, and shifted from wine to olive oil production.